January 12, 2012
I set a goal for myself to paint 26 miniatures to a point where I feel really good about showing them off to the world. If I'm going to do that I need to paint at least one every two weeks. I can do that. I've already gotten started!
This model comes from Reaper Miniatures and was painted for a friend. I painted the same model last year but that one has seen better days; he lost his sheld arm! Clearly this called for painting a new one. I've learned a lot in the half year since I painted the first version so I wanted to use this model to highlight the techniques. It mainly came down to patience, better drybrushing and new wash techniques. As you can see I've done more work on the details, painting his feet separately from the rest of his armor, painting the hilt of the sword and drybrushing the teeth. Though there was more work involved I think it actually took me about the same amount of time as when I first painted the model. Getting used to the techniques speeds things tremendously.


All the pictures are from my phone's camera -- I plan to have better pictures soon.

I went for a general theme of royal red so the reds tend to be highlighted with gold. The shield was layered with silver then a red-gold mix and then drybrushed with gold to build up the effect. The cloak was multiple shades of red then drybrushed with the same red-gold mix to give it a shimmering effect. The armor itself is supposed to be a dark, scary armor so I mixed a little bit of silver with black for the base coat and drybrushed a dark metallic over it. I'm pretty happy with the overall effect. 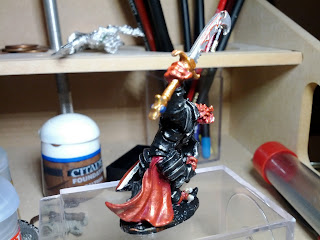 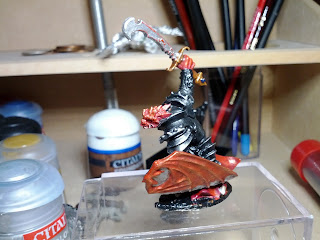 Popular posts from this blog

A post on dmg42 got me thinking about damage rolls in D&D. The main point of the post was that in 4e, damage doesn't scale with the players' abilities to mitigate the damage. He makes a great argument for new damage rolls (with graphs!) but it got me thinking, how do I distinguish the damage brutes do vs lurkers? I wanted something a little more flexible with burstier damage so I figured I'd write an app to show how damage is distributed for different sets of dice.  Other   tools  exist which do most of what I want but that would make for a boring project. So I'm working on a tool written in Go. Why Go? I went with go because 1) I've never used it, 2) someday I may want to use it seriously, and most importantly 3) it has the cutest mascot. I mean just look at it: I have one on my shelf. This one is from someone else's shelf. Learning new languages is fun and I'll have a post on surprising features of Go sometime later, once I feel mo
Read more

March 19, 2016
Last year at GenCon we bought Zombicide (which we'd later learn is referred to as Season 1). It was well regarded online, and we'd played a reasonable amount of Zpocalypse and Run, Fight, or Die! but were looking for something different in a zombie game. So, Zombicide. We played enough missions between us that we decided we wanted to try making a campaign of it. Also, after a few missions in Season 1, we wanted more variety. So we picked up Season 2 - Prison Outbreak  + Ultimate Survivors #1  to go with the base game. Since then we've been playing through the Season 2 missions as a campaign. That's working really well - tons of fun. The ultimate survivors make things easier, especially with accumulating experience, but the missions are still hard. Also, the mission difficulties are really arbitrary. Easy / Medium / Hard? ¯\_(ツ)_/¯ I think it's easier to estimate difficulty based on number of spawn points. Campaign Setup We've been using the set up for e
Read more

April 21, 2015
Last weekend at the Queens Half Marathon hosted by NYC Runs, I achieved one of my goals for 2015. I ran a half marathon in under two hours. My garmin had me finishing in 1:58:33 and the official time was 1:58:31. My previous best was around two hours, seven minutes so I took nearly 10 minutes off my time! Overall my pace was 8:55 / mile. I have to say I'm pretty happy with that! I think it's the last time I'll set a half-marathon PR for a while. The timing for this race was perfect. The course was mostly flat, the weather was perfect, and it was the first race of the year that I really pushed as hard as I could for. I'll push for the next race too (the Brooklyn Half Marathon) but after that I expect the weather to be too hot to push for a PR. That's fine. I have many more half marathons to run this year. Maybe in December I can try for a 1:45:00 half marathon! Anyway, 1:58:33, my best half time ever. It feels good.
Read more